When you approach the casket which contains Don Orione´s body in the shrine of Our Lady of Safe-keeping (Santuario della Madonna della Guardia, Tortona), you will be amazed to see how old and worn the shoes that the Founder is wearing are; you cannot fail to notice that there is a great hole in one of the soles.
At a casual glance a pilgrim might suppose that it is a simple oversight, but those old shoes truly reflect the evangelical poverty which Don Orione embraced during his life. 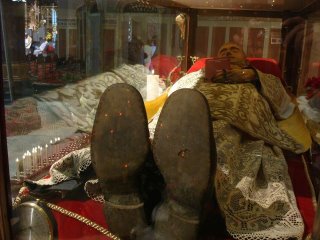 Let us consider some passages in his life which bear this out. 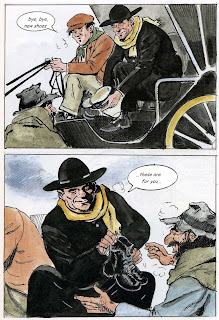 In his book “I fioretti di Don Orione” (“Don Orione’s Little Flowers”), Bishop Gemma tells us about a simple and direct gesture of Don Orione´s charity:
“…Don Orione was returning on foot from a mission he had preached in a mountain village. He knocked at the door of the parish priest of Borgoratto Mormorola and was treated as a welcome, if unexpected, guest. He was soaking wet and tired. He was given a change of clothes, some food and a fine pair of new shoes, which he immediately put on in place of the old ones, which were worn-out as usual.
Doctor Alberto Bernardelli happened to be in the presbytery, too, and when Don Orione expressed his wish to continue on his journey as soon as possible, he offered to take him in his own carriage as far as Casteggio.
They left the next morning, but stopped when they reached Fornace di Staghiglione,  as the doctor had to make a visit there. In the meantime a shabbily dressed beggar approached Don Orione, who was left alone in the carriage, asking for alms. Without a moment’s hesitation Don Orione unlaced the new shoes he was wearing and handed them over to the poor man. He then put on the worn-out ones which were still sodden with water.  It would have been hard to say which of the two was the happier.” [1]

As time went by, his religious and other people would learn to recognize Don Orione by his old and worn-out shoes.
There was once an amusing occasion when nobody recognized Don Orione because he was wearing new shoes and clothes, which, of course, belonged to someone else.
“Every year on his name day, Mgr. Rousset, the archbishop of Reggio Calabria, used to invite guests to a banquet, and one year Don Orione was also invited. He left Messina and duly arrived at the party looking unusually smart: carefully shaven and sporting a new hat and cassock, shoes in fairly good order, and a large Sicilian cape. Indeed, this was not the Don Orione everyone was used to seeing, but a really weird sight!
Fr. Albera, his former seminary classmate and later his companion in the apostolate, was also in Sicily after the earthquake and in charge of the archbishop's soup kitchen. He eyed Don Orione from top to toe and called out: «Where did you get all that? Where did you steal it?»
«Shhh!» Don Orione replied, «Don't put me to shame!  I borrowed it all from four different people. If I had come in my own cloak, shoes, hat and cassock, they would have thrown me out like the man in the Gospel parable...»” [2]

Something interesting happened in a little town called Staghiglione, where Don Orione went to preach on the occasion of Fr. Risi´s first mass on 17th June, 1900. The parishioners were excited to meet the young founder and superior of a new congregation. After the reading of the Gospel, a priest left the sacristy, genuflected before the altar and went up to the pulpit. Seeing his old, worn-out shoes, those nearest him commented: “That's not Don Orione! It can't be.” [3] But, a few seconds after he had begun his homily, the people remarked in their dialect: “L'é lú” (“it is him, it is him”)

In a circular letter on the occasion of Easter, Don Orione related what had happened to him one day when he was shoeless, and here we can see his sense of humour:
“Some months ago the Archbishop of Milan, his Eminence Cardinal Schuster, after a visit to the Little Cottolengo of Milan, said to our Fr. Sterpi: “Write to Fr. Orione, and tell him that if he still has any money left when he gets back from America, I won’t believe it is really  him!”
When this comment reached me, I couldn’t stop laughing for at least a quarter of an hour as, at that very moment, I had no  shoes, so I couldn’t even leave my room (…) I will place enmity between you and money,”  the Lord seems to have said to me.” [4] 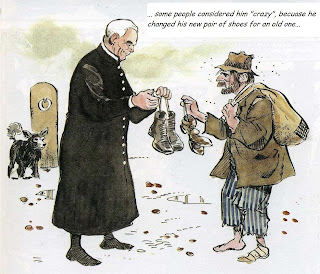 Lastly, in his letter “the Little Work is for the poor”, Fr. Flavio Peloso reminds us of something which happened after Don Orione´s corpse was embalmed:
“Standing in front of Don Orione’s casket, we shall once again see those old, worn-out shoes with a hole in the sole. As I look at those shoes I will think about what I heard from Doctor Maria Venturini, of Prof. Msgr. Gianfranco Nolli’s medical team, which had preserved Don Orione’s body.
«When we clothed him”, the expert doctor of anatomy recounts, “the priests gave us a pair of new shoes for his feet. We put them on him but, strangely, the next morning we found that they had come off. We tried again the following evening, and, in the morning, we found them again off his feet. Fr. Ignazio Terzi remarked to us, with what seemed to us rather pious reasoning, that perhaps Don Orione did not want new shoes, but old shoes, like a poor person. So we put on an old pair of shoes, which fitted him well. They are the ones that are still on the feet of Don Orione»”.[5] 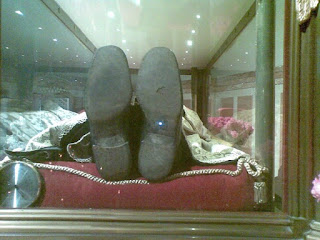 Looking at Don Orione´s body wearing old shoes, we remember how great his love for the poor and how generous his heart was.
So, when you visit the shrine of Our Lady of Safe-keeping, remember that the Founder´s mortal remains are awaiting the Lord’s coming, as Don Orione would have wished, wearing the shoes of a poor man.